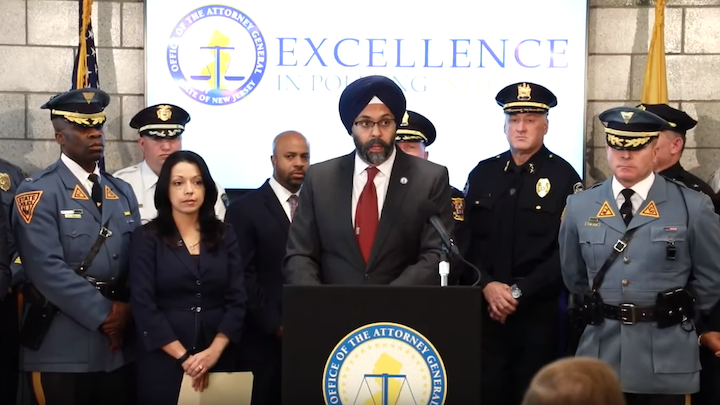 The reforms, some of which were spurred by news organizations’ investigations into troubling gaps in oversight, will create a public database of police use of force rates, ease public access to videos of police encounters and require county prosecutors to make sure their attorneys are turning over important evidence to people accused of crimes, including information about cops with credibility problems.

In an interview Wednesday morning, Attorney General Gurbir Grewal said the package of directives, along with some changes within his own office, are meant to promote “accountability and transparency."

As part of the overhaul, six New Jersey police departments were taking part in a pilot program to report all instances of use of force into an online portal modeled after The Force Report, an NJ Advance Media investigation that revealed a small number of police officers across the state accounted for a disproportionate number of police uses of force.

“It’s going to be an accountability tool," Grewal said. “It’s going to increase public safety, law enforcement safety and public trust, and we are going to share whatever we are permitted to share.”

Previously, police officers who used force on a suspect were required to log the incident in a brief report meant to track such cases. But NJ Advance Media’s investigation found very few departments actually reviewed the forms.

Under the pilot program, police in Bridgeton, Dover, Linden, Millville, Paterson, and South Brunswick will report uses of force directly to the attorney general using a secure online portal. Grewal said the six towns were selected because they represented a “cross-section” of New Jersey’s different police departments.

The list also includes “departments that, frankly, have had issues,” Grewal said.

Seven of Paterson’s police officers have been charged so far in an FBI corruption probe that found officers used excessive force, were shaking down suspects for money and other wrongdoing.

In Millville, a police officer identified in The Force Report as reporting the highest use of force rate in the state pleaded guilty last month to charges he assaulted two women during separate arrests.

Grewal said the vast majority of the state’s law enforcement officers behave honorably, and these new policies could make New Jersey a “national model for policing in the 21st century.”

Wednesday’s announcement also includes a revamping of the Police Training Commission and directs the group to come up with a proposal for licensing police officers. An Asbury Park Press Investigation found New Jersey was one of just a handful of states that don’t require licensure for police.

“New Jersey licenses the practitioners of many different professions, from accountants to veterinarians and cosmetologists to plumbers,” Grewal acknowledged in a letter to the Police Training Commission released Wednesday.

“Yet we are one of only a handful of states that do not license the police officers we authorize to carry weapons and deploy deadly force.”

The letter asks the commission “to prepare a report on the pros and cons of licensure."