Chicago Police Commander Who Had Officers Babysit Son is Demoted

Grand Central District Cmdr. Anthony Escamilla, whom the city’s inspector general accused of lying about directing on-duty officers under him to babysit his son with special needs, was stripped of his position. 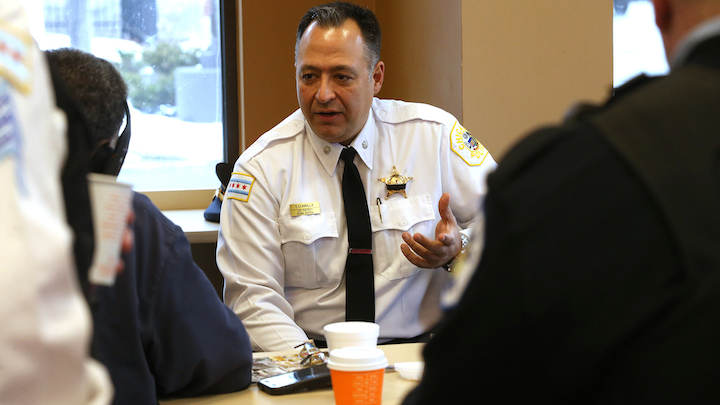 CHICAGO — A high-ranking Chicago police official whom the city’s top watchdog once recommended for possible firing for lying to its investigators was demoted Tuesday, officials said.

Grand Central District Cmdr. Anthony Escamilla, whom the city’s inspector general accused of lying about directing on-duty officers under him to babysit his son with special needs, was stripped of his position.

The move by interim Superintendent Charlie Beck comes a day after Mayor Lori Lightfoot fired Superintendent Eddie Johnson for lying to her about his conduct during an October incident in which he was discovered by officers asleep at a stop sign in his running vehicle.

Escamilla was demoted to the rank of captain and will work as an inspector, a supervisor who ensures that officers are wearing proper uniforms and following all other department rules.

His demotion is also one of the first big staffing changes for Beck, who indicated to reporters Tuesday he was still considering “structural changes” to the department.

Police spokesman Anthony Guglielmi said Beck “just wanted to go in a different direction” by removing Escamilla. But Guglielmi could not say whether the demotion had anything to do with an investigation showing that Escamilla lied to investigators while accused of directing on-duty officers under him to babysit his special-needs son.

City Inspector General Joseph Ferguson’s office announced in January it recommended possible firing for Escamilla, but Johnson at the time decided he instead be suspended for seven days.

Johnson has fiercely defended his controversial decision to reporters, sympathizing with Escamilla’s situation as a single parent raising a child with disabilities.

But in a confidential report on Ferguson’s investigation — details exclusively reported by the Chicago Tribune in February — Escamilla told the IG his actions were not about being unable to care for his son.

“It’s not specifically about a situation where someone needs to take care of my family,” Escamilla told investigators, according to the 38-page report.

In an interview with the IG last year, Escamilla sought to justify having his officers chauffeur his 15-year-old son from school and supervise him at the Grand Central District station on West Grand Avenue, claiming he was conducting a secret study.

Escamilla insisted that his son, who has autism, worked as a volunteer in the district’s community policing office and that he wanted to see how he interacted with officers.

He also told the inspector general’s office that he didn’t disclose this to any of his bosses because he wanted to “test” whether the arrangement truly worked.

But investigators dismissed Escamilla’s explanation as disingenuous and implausible. The officers complained that they were just watching over the boy for their boss.

“I mean, babysitting, let’s just put it out, I don’t know how to say it,” one officer told the investigators. “I never thought about taking care of a kid from another officer on my job hours.”

A community policing sergeant and other officers also indicated to investigators they felt they were under orders from Escamilla to watch his son. The sergeant told an investigator he felt uncomfortable telling Escamilla that watching his son was a waste of police resources because Escamilla outranked him.

One community policing officer said watching Escamilla’s son caused her to interrupt a phone call with a domestic violence victim.

“I have to do my job and then I have to supervise him,” she said.