NYPD Commissioner Dermot Shea, who was sworn in as the department's 44th commissioner on Saturday, asked his officers to turn their focus towards crime prevention on his first day. 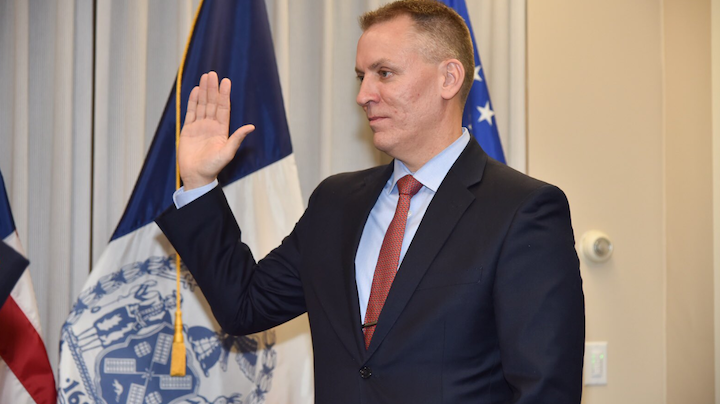 NYPD Commissioner Dermot Shea, who was sworn in as the department’s 44th commissioner on Saturday, asked the city's officers to turn their focus towards crime prevention in a department-wide email.
New York Police Department

NYPD Commissioner Dermot Shea, who was sworn in as the department’s 44th commissioner on Saturday, asked cops to turn their focus towards crime prevention in a department-wide email.

“(To) take Neighborhood Policing to the next level by helping kids stay away from trouble before they ever find it.”

Neighborhood policing was introduced as an NYPD pilot program in four precincts in May 2015 and spread to every precinct last year. The program divides precincts into several neighborhood-based sectors and assigns two neighborhood coordination officers (NCOs) to each sector. The NCOs aim to work with residents proactively to identify and solve problems before they become full-fledged crimes or emergencies.

In his quasi mission statement, Shea called on members to help change any negative narratives surrounding the department through professionalism and respect.

In taking over the country’s largest police department from his predecessor James O’Neill, Shea inherits a number of challenges.

Statewide sweeping bail and criminal justice reforms are set to come into effect on Jan. 1, 2020, pressuring cops to issue summonses instead of making arrests for low-level offenses.

The closure of Rikers Island, slated for 2026, has also put pressure on the department to decrease the number of arrests.

“Respect is a two-way street. I know you exemplify that every day, but we will ask for that respect to be reciprocated – for people to recognize you as the professionals you are,” Shea wrote in the email.

“I will stand up and demand accountability if there is violence used against any uniformed or civilian member of our department. We will never tolerate such contempt.”

Shea, 50, a son of Irish immigrants who grew up in Sunnyside, Queens, is a 29-year vet of the NYPD. He started out as a patrolman in the South Bronx in 1991 and was later assigned to narcotics and various plainclothes units.