Ohio Trooper Thanks Those Who Saved Him After Crash 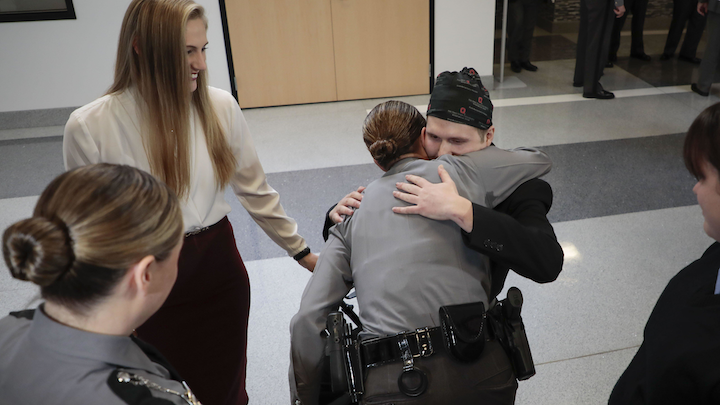 State Highway Patrol Trooper Jason Phillips, center, gets a hug from Sgt. Kristi Comstock before a recognition ceremony on Wednesday at the Ohio State Highway Patrol Training Academy in Columbus. His sister, Crystal Short, is upper left. Sgt. Comstock was among the first responders to the scene of an accident where Phillips, 23, collided head-on with a wrong-way impaired driver in June 2019. A number of motorists stopped to help Trooper Phillips out of his vehicle immediately following the wreck. The Highway Patrol recognized these civilians along with other first responders and medical personnel who helped save Trooper Phillips's life.
Joshua A. Bickel/Dispatch/TNS

COLUMBUS, Ohio -- The commanders at the Ohio State Highway Patrol Academy had already moved the furniture around to clear a space for Trooper Jason Phillips' wheelchair.

Then word spread through the building: Better find a chair because Phillips had arrived and was determined to walk down that long academy hallway under his own power.

Wednesday was the day that Phillips and his parents would get a chance to show two important things. First, that no matter how much life has changed for them since a wrong-way driver nearly killed Phillips in a fiery on-duty crash on June 27, God is good and they remain hopeful in his recovery. Secondly, join in gratitude with hundreds of people gathered to honor all those who saved Phillips' life after that crash on Interstate 71 in Morrow County.

Phillips, 23, had a couple of things he wanted to say publicly for the first time since his crash.

"Thank you. Thank you for thinking of me and for caring," Phillips said, his speech still halting because of a traumatic brain injury. "Home, therapy and God," are helping him recover, and he simply wants "to get back into those grays," referring to the patrol's uniforms.

"I have to learn how to walk again," he said, something he's doing slowly but steadily with the help of a four-wheeled walker with a seat in case he gets tired. He has daily physical and occupational therapies as he works to regain his motor skills, strength and endurance from his physical injuries.

And then there are the countless hours of relearning speech and trying to get back his ability to remember.

Phillips was responding to a call of a wrong-way driver on a stretch of I-71 in eastern Morrow County just after 2:30 a.m. June 27 when he was hit head-on about four miles north of the Route 95 Mount Gilead exit.

Drivers stopped and ran to the mangled vehicles, even as flames erupted and the ammunition in the trooper's cruiser exploded in the heat.

Several men pulled an unconscious Phillips from the wreckage, and a team from Morrow County Emergency Medical Services tended to him at the scene. A Survival Flight helicopter landed on the interstate and whisked him away to Ohio State University's Wexner Medical Center, where a surgical intensive-care team worked around the clock to save him.

All of them received special honors from the patrol during Wednesday's ceremony.

Patrol Superintendent Col. Richard Fambro told the crowd that everyone who helped Phillips that night is owed a debt of gratitude.

Among them was 61-year-old Harold Heller, a semi driver with R&J Linehaul Inc. out of North Canton. He was heading north with a load of FedEx packages when he watched the crash happen.

He grabbed a steel bar from inside his truck cab and ran toward the chaos. He and others broke Phillips' cruiser windows and pulled him out. Heller says he cut the trooper's seat belt with his pocket utility knife.

Heller said that when he saw Phillips, he thought it was already too late. Yet none of the rescuers gave up.

"It was something none of us will ever forget," he said.

The wrong-way driver, 36-year-old Michael Marchak Jr., also was injured. He has pleaded guilty to aggravated vehicular assault, operating a vehicle under the influence and other charges.

The days since the crash have not been easy. But the Phillips family looks to accomplishments — even basic things, such as Jason writing his own name or tying his own shoe — and faith to lift them.

Tina Phillips said the support her son has received from around the world — from as far away as Finland and from right in their own Pickaway County community — has overwhelmed them. She said no one should underestimate how much every call, prayer, card or other kind gesture has meant.

Tina admits, though, that some moments are more difficult than others.