Former New York City Mayor Michael Bloomberg got religion on stop-and-frisk after years of defending the policy — which disproportionately targeted black and Latino people — as he seriously contemplates a presidential run. 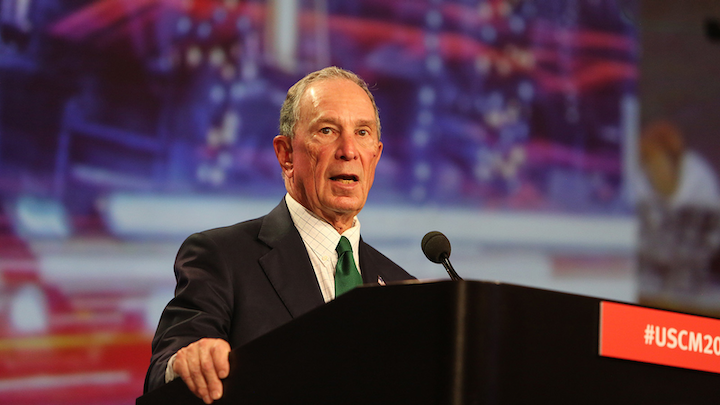 NEW YORK — Former New York City Mayor Michael Bloomberg got religion on stop-and-frisk after years of defending the policy — which disproportionately targeted black and Latino people — as he seriously contemplates a presidential run.

“I now see that we could and should have acted sooner, and acted faster, to cut the stops,” he said at a black megachurch in Brooklyn on Sunday.

“I wish we had and I’m sorry that we didn’t, but I can’t change history,” he continued. “However, today I want you to know that I realized back then that I was wrong and I’m sorry.”

The remarks came during Bloomberg’s first speech since he began taking steps to enter the Democratic presidential primary earlier this month.

By picking the Christian Cultural Center in East New York as the venue, he was zeroing in on a vital constituency.

Bloomberg’s previous defense of “stop-and-frisk” policing is seen as one of his biggest political liabilities among Dems. He’s filed paperwork to be in the Democratic primary in Arkansas and Alabama, part of a strategy in which he would ignore the first four states in the race if he ultimately decides to enter.

Stop-and-frisk, in which officers are empowered to search people if they are suspected of illegal activity or carrying a weapon, reached a peak of 685,000 cases in 2011, during Bloomberg’s third and final term. Black and Latino New Yorkers comprised 54% and 34% of stops that year, respectively, according to the New York Civil Liberties Union.

In 2013, a judge ruled the practice had been applied in an unconstitutional way and a federal monitor was appointed to oversee reforms. While Bloomberg railed at the decision at the time, the NYPD began reducing use of stop-and-frisk, an effort championed by Mayor de Blasio when he took office in 2014.

Bloomberg defended the practice for years after he left office, making Sunday’s apology all the more striking.

“The fact is, far too many people were being stopped while we tried to (reduce crime) and the overwhelming majority of them were black and Latino,” Bloomberg told congregants Sunday.

“Because of the number of stops of innocent people, because it had been so high, resentment had built up,” he continued. “We eroded what we had worked so hard to build: trust. Trust between police and communities, trust between you and me.

“And the erosion of that trust bothered me deeply. And it still bothers me. And I want to earn it back.”

Bloomberg took the stage to quiet applause, after his host Rev. A.R. Bernard told the crowd, “Come on, CCC, show some love and appreciation.”

But after services ended, congregants voiced approval of the ex-mayor’s speech.

“He acknowledged he made a mistake. You can’t get help until you acknowledge a problem,” said Kevin Jennings, a Wall Street exec. “Integrity is what we build things on here at church.”

“He realized he didn’t do everything right. He reflected on it,” said Dianne Mullins, an accountant. “I hope he does run.”

“Forgive many of us for questioning apologies a decade late and on the eve of a presidential run,” Public Advocate Jumaane Williams said in a statement. “It is not nearly enough to erase the legacy of the systemic abuses of stop, question and frisk.”

In spite of the current mayor’s crackdown on stop-and-frisk, the practice continues to this day, though not at the levels during the Bloomberg administration.