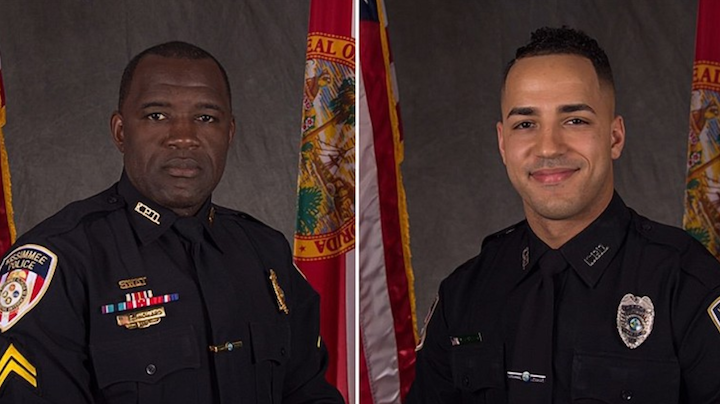 The 12-member jury deliberated for five-and-a-half hours at the Osceola County Courthouse before deciding the Marine Corps veteran should be sentenced to death for fatally shooting Sgt. Richard “Sam” Howard, 36, and Officer Matthew Baxter, 26.

Miller showed no visible emotion as the verdict was read, and his family did not comment after the recommendation was announced. The families and friends of Howard and Baxter silently wiped away tears.

The same jury found Miller, 48, guilty of first-degree murder on Sept. 11 in the 2017 killings. Outside the courthouse, Baxter’s widow, Sadia Baxter, said “justice was served” with the jury’s decision.

“Me and my girls will be able to move forward,” Baxter said, her voice shaking. “We won’t forget about our heroes. But I think it’s time as we came to this conclusion to start closing this chapter.”

“This won’t be tolerated,” O’Dell said. “We’re better than what happened this night.”

Miller could only be sent to death row if jurors recommended it unanimously. Circuit Judge Greg A. Tynan will decide later whether to follow the jury’s recommendation or sentence Miller to life in prison.

The case is scheduled for a status hearing on Dec. 20. Miller will have an opportunity to persuade the judge against a death sentence at another hearing, which hasn’t been scheduled.

During closing arguments at the Osceola County Courthouse, Assistant State Attorney Ryan Williams said the Marine Corps veteran was angry about the course of his life and adopted extremist anti-government beliefs, which led to him blaming law enforcement officers.

“Everett Miller shot Officer Matthew Baxter and Sgt. Sam Howard to send a message,” Williams said. “A message that was as clear as the blood on their uniforms. ... That message was, not only are you not safe — but this is punishment.”

Defense attorney Roseanne Eckert told jurors Miller would die in prison for killing Baxter and Howard regardless of their vote — but the jury would decide if it’s by natural causes or at the hands of the state.

“I’m going to ask you to consider how Master Sgt. Miller, the proud decorated Marine, turned into this broken, barefooted mentally ill man,” she said. “There’s nothing wrong with considering mercy and redemption.”

Jurors found the state proved beyond a reasonable doubt four aggravating factors sufficient to warrant death. But the jury did not find Miller’s defense attorneys proved any mitigating factors that supported a sentence of life imprisonment, including circumstances surrounding his life and military service.

Williams said he was surprised the jury found no mitigating factors were proven because during closing arguments, he conceded Miller had a successful career in the Marine Corps.

Eckert said was she was concerned about the decision. Miller’s attorneys tried to get each mitigating factor listed on the jury verdict form but the judge ruled against it — instead the form asked whether “one or more circumstances” were established, she said.

Eckert pointed to verdict form used in the trial of convicted killer Scott Edward Nelson, where more than 50 mitigating factors were listed, according to court records. Despite her concern, Eckert said she appreciated the service of jurors.

“We picked this jury,” she said. “We were happy with the jurors. They were smart, they were engaged. It was a diverse group of people. They were attentive, they took notes. I have no doubt that to the best of their ability, they gave Mr. Miller a fair trial.”

Baxter was conducting a routine check on three people the night of Aug. 18, 2017, near Cypress and Palmway streets when Miller suddenly drove up and started arguing with him for “messing with his people,” according to a witness.

Baxter called Howard, his superior officer, to the scene. After an argument, Miller ambushed the two cops, shooting each of them in the head and face, prosecutors said.

He was later arrested at a bar on Orange Blossom Trail.

Miller’s defense attorneys have argued the Marine veteran had post-traumatic stress disorder that eventually led to a mental breakdown during the summer of 2017.

Military colleagues, family and friends testified Miller had a successful career, but his life took a downward spiral after leaving a defense contracting job where he targeted enemy combatants with drone strikes.

He expressed remorse over killing innocent bystanders and, in the months before the killings, lost his job at a packaging company, became homeless and broke up with his girlfriend.

Witnesses told jurors Miller shocked those who knew him with social media posts where he railed against the government and law enforcement, talked about killing white men and expressed anger about high-profile police brutality cases involving unarmed African Americans.

A month before the shooting, he was involuntarily committed under Florida’s Baker Act for running in the streets with a high-powered rifle wearing only boxers. Miller went to the Veterans Affairs medical center several times starting in May 2017 worried he had post-traumatic stress disorder because of his increased anger and irritability, according to clinical neuropsychologist Robert Cohen.

The last time Miller went to the VA seeking help was four days before the murders, Cohen said.

Williams argued Miller had family members who cared about him during this period and received treatment from the VA, but he missed appointments and refused to take medication.

“It’s worth noting every misstep we saw once Mr. Miller’s service was over was steeped in blame,” Williams said. “It was always someone else’s fault.”

Eckert argued Miller was a loving father and son with an exceptional military career who was under extreme emotional distress that caused him to be manic and paranoid.

“There’s no doubt that Glenn Miller was out of his mind that summer,” she said.