Mayor Jane Castor was in her city-issued black Chevy Suburban with her driver, Mike Victor, another ex-cop, when they noticed a man with backpacks "front and back" pedaling around. 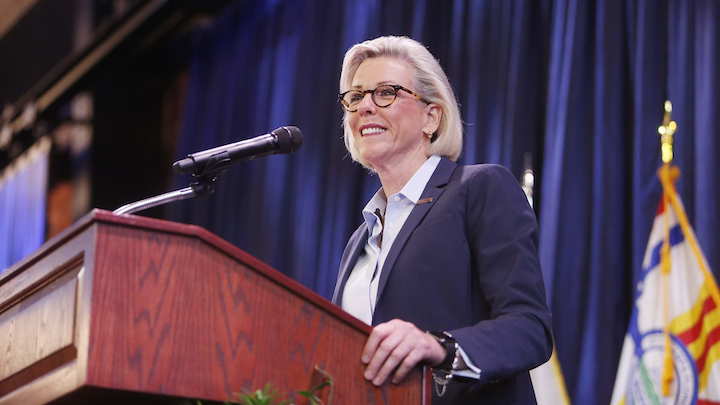 Mayor Jane Castor was in her city-issued black Chevy Suburban with her driver, Mike Victor, another ex-cop, when they noticed a man with backpacks “front and back” pedaling around North Tampa on Wednesday morning.
OCTAVIO JONES/Tampa Bay Times/TNS

TAMPA — You can take the mayor out of her police uniform, but you better avoid suspicious activity when she’s around.

Mayor Jane Castor was in her city-issued black Chevy Suburban with her driver, Mike Victor, another ex-cop, when they noticed a man with backpacks “front and back” pedaling around North Tampa on Wednesday morning.

“It looked like he was casing the neighborhood,” Castor said. “Sure enough, that’s what he was doing.”

Hickman rode through a stop sign, where officers conducted a traffic stop. Officers remembered a previous alert about a bicyclist riding a white bicycle with orange forks that had been burglarizing residential sheds in the area.

It wasn’t the first time a Tampa mayor was involved in a burglary case.

Bob Buckhorn, known to be an aficionado of the police radio, once heard about a burglary in progress and urged Victor to get to the scene. As the mayor later recounted to the Times, Victor stalled until the scene was secured.

Castor and Victor didn’t stop, although they did follow Hickman until he turned into a driveway. Victor kept police informed of Hickman’s activity via police radio.

RELATED: The man who drives mayors

When Castor took office in May after 31 years as a police officer and a few years as a consultant to police departments, she said she felt awkward having to be driven around a city where she knows every block and alley.

But on Wednesday, the mayor said it was fun to get back into police work with an old colleague.

“We’re a little rusty, but we apparently still have game," Castor said.

After all, it’s what Castor as the city’s police chief between 2009 and 2015, used to implore her fellow Tampa residents to do.

“Call in if you see something suspicious.”