The governor announced Wednesday that Massachusetts State Police Lt. Col. Christopher Mason, currently a deputy superintendent in the agency, is being named the head of the state police. 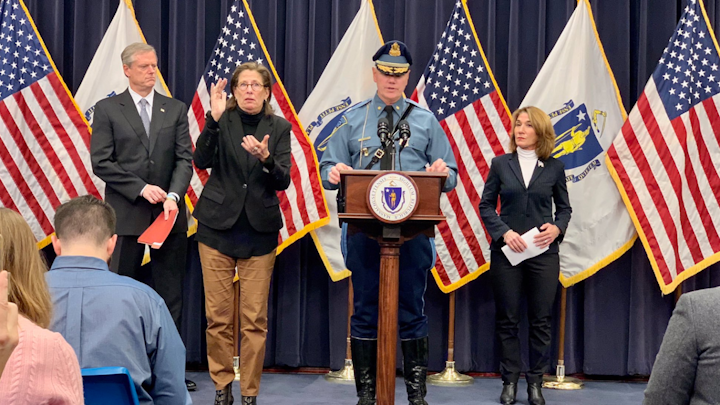 The governor announced Wednesday that Massachusetts State Police Lt. Col. Christopher Mason, currently a deputy superintendent in the agency, is being named the head of the state police.
Massachusetts Governor's Office

SPRINGFIELD, Massachusetts -- The governor announced that Massachusetts State Police Lt. Col. Christopher Mason, currently a deputy superintendent in the agency, is being named the head of the state police.

At a pivotal time for the @MassStatePolice, Chris Mason has the experience and vision to lead the Department forward with reforms and innovation.

We are grateful for the changes put in motion under Col. Gilpin, and support Col. Mason as he completes these critical reforms. pic.twitter.com/ldzXoo72JE

“As a member of my Command Staff, Lieutenant Colonel Mason has been at the center of discussions and decisions that have led to numerous improvements within the Department’s operations,” Gilpin said back in January. “He, like Lieutenant Colonel O’Brien, is someone whose opinions and ideas I highly value, and as Deputy Superintendent he will continue to work by my side as the Department continues to fulfill its mission of protecting the lives, safety and property of the people who live, work, and raise families in our state.”

Gilpin announced her retirement on Nov. 6. She is officially retiring on Nov. 15.

Gilpin was named the head of the state police in 2017 following the retirement of Richard McKeon.