Dozens of troopers lined up outside a Worcester courtroom Tuesday, barred by from entering as the judge delivered her split verdict for the man charged in Trooper Thomas Clardy's death. 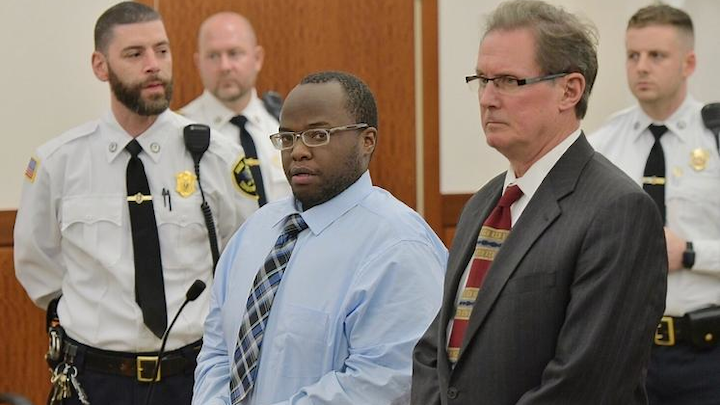 WORCESTER, Massachusetts -- Dozens of uniformed state troopers lined up outside a Worcester courtroom Tuesday, barred by the judge from entering as she delivered her split verdict for the man charged in trooper Thomas Clardy’s death.

“We are concerned with the decision to bar uniformed troopers from entering a public courtroom during this jury-waived trial,” a union spokeswoman said in a statement.

Kenton-Walker insisted “that ruling was not made in disrespect.”

“This court is a neutral place and impartial at all times,” the judge added. “The neutrality must be embodied in the courtroom itself … to a fair and impartial trial and a neutral tribunal.”

A number of troopers gathered around a phone to hear a live-stream at the verdict’s climax — when Kenton-Walker ruled David Njuguna was guilty of some counts but not guilty of others. One trooper put her hand on another trooper’s shoulder as they listened to the judge.

As the courtroom doors opened and Clardy’s wife and children walked out, the troopers stood at attention. Troopers declined to speak to reporters.

Kenton-Walker was also the judge in the “House of Horrors” Blackstone trial. She cleared Erika Murray of a second-degree murder charge, saying prosecutors failed to prove she had caused the death of one of three dead babies found inside her squalid home. Murray was found guilty of two counts of assault and battery on a child causing substantial bodily injury on her 3-year-old and 5-month-old daughters.

Andrew Martinez contributed to this report.