Aurora Police Officer Adam Miller returned to the midnight shift Tuesday for the first time since he was shot in the face on Feb. 15 and Officer Reynaldo Rivera, who was shot twice in the leg, also returned to full duty last week on the day shift. 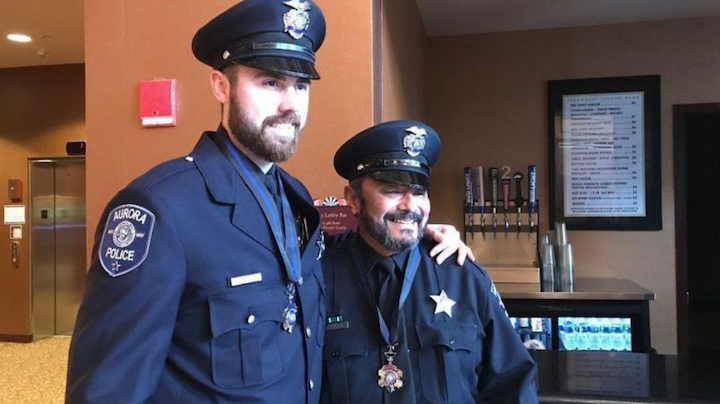 Aurora Police Officer Adam Miller returned to the midnight shift Tuesday for the first time since he was shot in the face on Feb. 15 and Officer Reynaldo Rivera, who was shot twice in the leg, also returned to full duty last week on the day shift.
Aurora Police Department

AURORA, Illinois -- Two Aurora police officers have returned to full duty almost nine months after they were shot during the mass shooting at Henry Pratt Co. in the city.

Officer Adam Miller, 24, returned to the midnight shift Tuesday for the first time since he was shot in the face on Feb. 15. A disgruntled Pratt employee shot and killed five fellow employees that day and shot and injured five Aurora officers and another employee before he was killed in a shootout with police.

As Miller was shot, he was heard over the police radio saying “I’m shot — still in the fight,” a phrase that quickly became a mantra for the department as it dealt with the aftermath of the Pratt shooting.

“His resilience and fighting spirit have been an inspiration to us all,” Aurora Police Chief Kristen Ziman said.

Miller was struck by a bullet that grazed Officer James Zegar’s neck, then ricocheted off Miller’s rifle and struck him in the middle of the forehead where a fragment lodged behind Miller’s right eye. The wound has caused permanent blindness in that eye.

Miller continued to advance upon the shooter for another 20 minutes before the flow of blood from his injury became too intense, officials said.

Miller said he was eager to return back to work and had already been to the gun range several times by late April.

Officer Reynaldo Rivera, who was shot twice in the leg, also returned to full duty last week on the day shift after he spent the last nine months undergoing physical therapy to regain full use of his leg.

Ziman noted how supportive community members have been to the police officers injured in the mass shooting.

“On behalf of a grateful police department, thank you for the love and support you have given our officers as they have fought their way back to wellness," Ziman said.

Three other officers were also shot during the Feb. 15 incident. Zegar was the first to return to full duty shortly after the shooting. Officers John Cebulski and Marco Gomez are working on light duty while they continue physical therapy.

Cebulski said he is waiting on medical results to determine if he will ever be able to return to full duty with the police department. Gomez, who nearly bled to death after being shot in the right hip, had to undergo additional surgery this summer for a torn meniscus that set his recovery back six months.