Chief of Detectives Dermot Shea, tapped last week by Mayor de Blasio to replace retiring Police Commissioner James O’Neill, met with the Rev. Al Sharpton and others at the minister’s Harlem headquarters and vowed the NYPD will serve all New Yorkers. 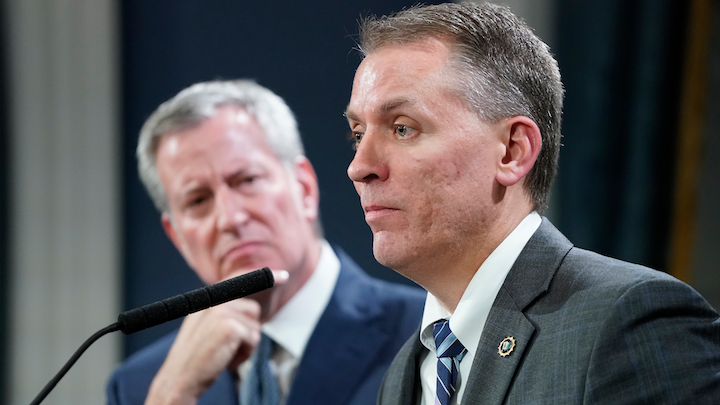 NEW YORK -- New York City’s next top cop got an earful Monday from local leaders on everything from community policing to bail reform.

Chief of Detectives Dermot Shea, tapped last week by Mayor de Blasio to replace retiring Police Commissioner James O’Neill, met with the Rev. Al Sharpton and others at the minister’s Harlem headquarters and vowed the NYPD will serve all New Yorkers.

“It’s very fitting that I am here because I am the commissioner-to-be of not just the police department but of all of New York, of 8.5 million New Yorkers,” Shea said outside the National Action Network’s House of Justice on W. 145th St.

Shea left before the others spoke.

Shea’s appointment was met with mixed reaction among critics who thought de Blasio missed an opportunity to put a person of color in charge of an increasingly diverse police force. Among those who expressed disappointment was First Deputy New York City Police Commissioner Ben Tucker, an African American said to have been in line for the job.

“First and foremost, we expressed to the soon-to-be commissioner that we were very concerned and surprised that Ben Tucker had been looked over to be commissioner,” Sharpton said. “Because of him (Shea) being chosen at a time when we felt Mr. Tucker had been overlooked for the second or third time, he comes with a sort of awkwardness that he inherits.”

Sharpton said he told Shea there is still tension in the black community over police misconduct and the controversial chokehold death of Eric Garner in 2014. Sharpton said he also voiced concerns about racial profiling.

Among those joining Sharpton were Erik Cliette of the New York Urban League, Jennifer Jones Austin of the Federation of Protestant Welfare Agencies, and Donna Lieberman of the New York Civil Liberties Union.

“This is a symbolic statement by the new commissioner of concern about policing about the black community and that’s an important statement,” Lieberman said. “But we know he is both inheriting low crime rates but low community trust, and I appreciate that he recognizes that as a problem.”