Spokane police Officer Dan Lesser received one day of unpaid suspension for shouting vulgar death threats and failing to immediately activate his body camera during a February arrest in which he released a police dog into a suspect’s vehicle. 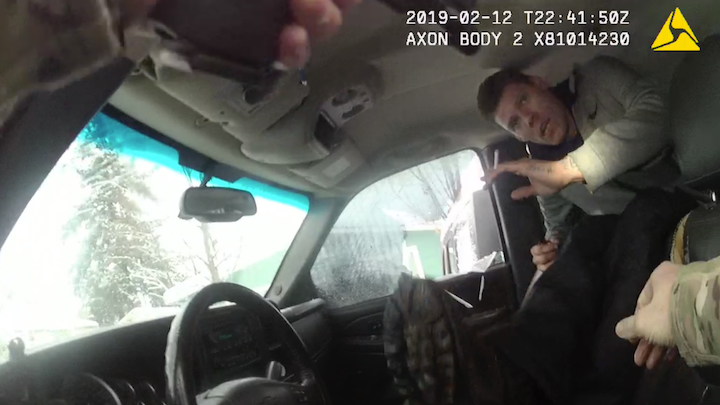 Spokane police Officer Dan Lesser received one day of unpaid suspension for shouting vulgar death threats and failing to immediately activate his body camera during a February arrest in which he released a police dog into a suspect’s vehicle.
Spokane Police Department

SPOKANE, Washington -- Spokane police Officer Dan Lesser received one day of unpaid suspension for shouting vulgar death threats and failing to immediately activate his body camera during a February arrest in which he released a police dog into a suspect’s vehicle.

Sgt. Terry Preuninger, a spokesman for the Spokane Police Department, disclosed Lesser’s suspension on Thursday, the day after Lesser publicly apologized through the Spokane Police Guild, which also issued a statement condemning his language.

The sanction includes a probationary period. If Lesser violates the department’s body camera policy again, he will automatically be suspended and a new disciplinary process will begin.

The police department last week released graphic body camera footage of the Feb. 12 arrest of Lucas Ellerman, 29, which triggered a citizen’s complaint and an impasse between the guild and City Council members.

It shows Lesser telling Ellerman, “I’m going to put a bullet in your brain” and repeatedly yelling “I will f***ing kill you,” before Lesser and his nephew, Officer Scott Lesser, hoist a dog into the cab of a pickup truck to subdue Ellerman.

Ellerman, who is now serving time at the Airway Heights Corrections Center, received minor surgery on his leg due to an infection from the dog bite.

The threats Lesser used throughout the arrest raised red flags for police Ombudsman Bart Logue, who has said the officer’s language might suggest his actions were malicious or punitive.

But police officials concluded that Lesser acted reasonably by pointing a gun and using a dog to apprehend Ellerman, whom they believed to be armed. Lesser was sanctioned for the vulgar language and for not activating his body camera at the start of the vehicle pursuit that preceded Ellerman’s arrest.

“Despite the intense and rapidly evolving circumstances surrounding the potentially lethal use of force Ofc. Dan Lesser was involved in February of this year, the language he used could only be viewed as unprofessional and unacceptable,” the Spokane Police Guild wrote in a statement Wednesday, the first time the union commented publicly since the body camera footage was released.

The guild previously objected to Logue’s involvement in the investigation of the arrest.

“The officers of the Spokane Police Guild endeavor to provide each member of our community with the best and most professional service possible; this time we fell short,” the statement said.

Lesser – who has multiple prior body camera violations, including one in January – resigned from the department’s K-9 unit one day after Ellerman’s arrest.

In a letter shared by the guild, Lesser wrote that his choice of language “eroded the community trust and support our department has worked so hard to earn and maintain.” He previously told internal affairs investigators his shouting and language were a deliberate tactic to disrupt Ellerman’s thinking.

“I want to sincerely apologize to all of you for the negative light I have placed on our department,” Lesser wrote. “During the extremely dangerous arrest, I used unprofessional language in my effort to avoid using lethal force.”

Police Capt. Tom Hendren, who determined Lesser’s use of the police dog was within policy after two supervisors said it wasn’t, questioned Lesser’s choice to leave his vehicle and engage Ellerman through a broken vehicle window.

“When (Lesser) was in the process of breaking out the window he is completely vulnerable to an assault with a firearm,” Hendren wrote in a report. And “by placing himself at the door, he does not have any cover and greatly reduces his time to react if the suspect did brandish a weapon.”

Hendren and police Maj. Kevin King recommended that aspects of the incident, including tactical choices, be used in future police training. In his letter, Lesser offered to address and mentor other officers, so they can learn from his misconduct.

Officer Mark Brownell also was disciplined for not properly activating his body camera during the Feb. 12 incident.

Brownell did not participate in Ellerman’s arrest but interviewed the driver of the truck, Monty Nelson, who was transporting Ellerman before his arrest. Brownell also interviewed Ellerman’s sister, who accused the officer of threatening her and cursing at her home.

Brownell turned his body camera on and off while interviewing Nelson and did not activate his camera during the interaction with Ellerman’s sister or document it in a report. Police officials determined Ellerman’s sister’s allegations were not credible through interviews with U.S. marshals at the scene, but said Brownell should have recorded the conversations.