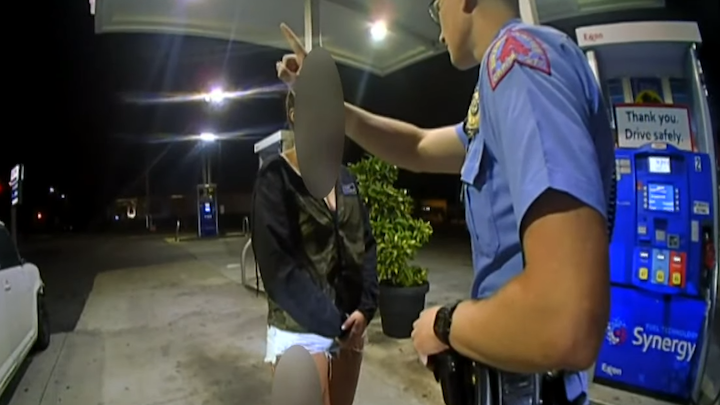 “To use such a comment, to use that language thrown around, I needed to speak,” Deck-Brown said at a press conference Wednesday. “I was appalled when I first heard it.

“It impacts our overall goal to serve and protect on a daily basis,” she said.

Deck-Brown called the press conference to respond to allegations reported by WRAL that an officer conducted an improper search of a woman suspected of driving under the influence. The incident happened Sept. 25.

WRAL reported police arrested a 26-year-old woman they saw driving erratically after she stopped to get gas on St. Mary’s Street in Raleigh.

A video from the officer’s body camera and dash cam shows the officer unzipping the woman’s jacket and touching her body while she is in handcuffs.

Karen Griffin, a lawyer for the unidentified woman, says the search was inappropriate. She told WRAL that she had never seen a “search that invasive.”

“My client was sexually assaulted by the arresting police officer. The search he performed incident to her arrest was not a normal search,” Griffin told The News & Observer by phone in a prepared statement. “ I consulted with several attorneys and current and prior law enforcement. All of those individuals agreed that what the officer did was wrong and that he groped her inappropriately in all of her private areas.”

Deck-Brown said she first learned of the allegation this week and said her department would file a formal request to release the video footage in its entirety.

The driver had a blood alcohol content of 0.15, WRAL reported, almost twice the legal limit of 0.08.

Deck-Brown stood in front of 15 police officers outside Raleigh City Hall and said the arresting officer was “absolutely professional in everything he did.” She bristled at the use of the term “sexual assault” and said it “undermines the impact that sexual assault victims feel for a lifetime.”

“He treated that person with dignity and respect,” she said. “He did not treat that call lightly at all.”

She said there are protocols to address searches, including strip searches that are more invasive. In those cases, that means having someone of the same gender as the suspect conduct the search.

She said a female officer was present during the arrest on Sept. 25.

But Griffin told The N&O in a prepared statement that “a female officer was present at the scene and none of the other officers present suggested that the female officer should perform the pat-down.”

Deck-Brown said officers aren’t perfect, but complaints are handled and officers can be disciplined accordingly. She said this case should have “played out in court.”

“If there was a question about the search, speak to the search,” Deck-Brown said. “But to allege that an officer committed a sexual assault is highly inappropriate, highly unprofessional, egregious to say the least.”

Deck-Brown said conducting a thorough search is important for the officer’s safety.

She cited Officer Delma Adams, who was shot and killed in 1980 while making a DWI arrest.

The person he arrested shot him from the back seat of the car. “He ended his watch in 1980 because a thorough search did not happen,” Deck-Brown said.

He had been with the department since 1967 and was 33 when he was killed.

Deck-Brown said the search is important for the safety of staff at the jail, who need to seize contraband during an inmate’s processing, she said.

“Searches are invasive by their nature, in order to make sure the officer is protected,” Freeman told the station.