Colonel Kerry Gilpin is stepping down from her post as the head of the Massachusetts State Police as her embattled department has faced scandal after scandal. 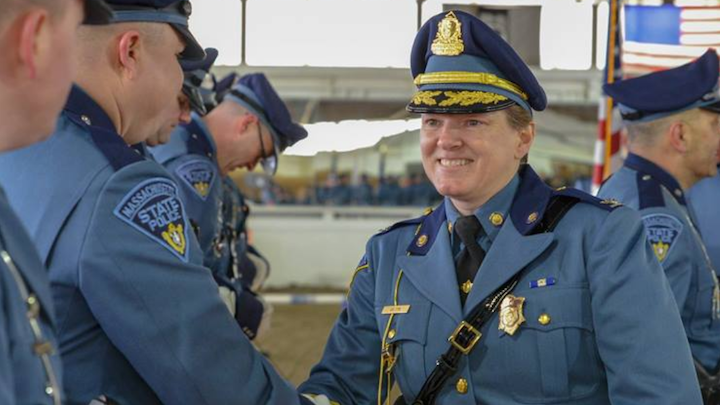 SPRINGFIELD, Massachusetts -- Colonel Kerry Gilpin is stepping down from her post as the head of the State Police as her embattled department has faced scandal after scandal.

Gilpin, Superintendent of the Massachusetts State Police, sent out a letter this morning announcing her retirement to members of the department, effective Nov. 15, after two years in the position. Gilpin, 49, has overseen the 2,100-member organization amid the overtime scandal and recent trooper misconduct.

“I leave this job with the satisfaction of knowing that I gave it my heart and soul, under the most trying of circumstances,” Gilpin wrote in her letter. “I am extremely proud of the progress and accomplishments we have made together. The Massachusetts State Police is composed of some of the best law enforcement personnel in the nation and I leave with the privilege of having worked alongside all of you.”

Gov. Charlie Baker appointed Gilpin amid a scandal that led to two federal lawsuits and the hasty retirements of then-Col. Richard McKeon and his second-in-command, Francis Hughes. Their departures came after McKeon ordered a trooper to scrub embarrassing statements from an arrest report involving a judge’s daughter.

Baker’s office did not immediately respond to requests for comment on Gilpin’s retirement Wednesday.

Next came an overtime abuse scandal that has embroiled more than 40 troopers suspected of faking overtime shifts.

Gilpin has overseen and expanded a state investigation into overtime abuse, an effort that included disbanding the former Troop E which was assigned to patrol the Massachusetts Turnpike.

While that investigation remained ongoing, the state police — under Gilpin’s leadership — destroyed payroll records as part of a routine procedure.

Following the destruction of those documents, the state’s Records Conservation Board has since refrained from approving further destruction of records while the investigation into the agency continues.

In her letter, the Colonel noted that the department has taken action to address their “transgressions,” conducting “thorough and painstaking” investigations.

“It remains deeply disheartening to me that a small number of our personnel chose to violate our principles and values,” Glipin wrote. “I have been tremendously disappointed that some members of this remarkable organization have betrayed the public trust that so many of us worked so hard to earn. I have been fully committed to restoring that trust to ensure that the actions of a few do not overshadow the reputation and hard work of the vast majority who conduct themselves with the utmost integrity every day.”

“Kerry Gilpin has committed herself to the most fundamental work of law enforcement: protecting the public, serving the community, and advancing the interests of justice inside and outside the Department of State Police,” Turco said. “As colonel, she has implemented meaningful, lasting changes at every level of the Department, and I am grateful for her service and wish her the very best in her retirement.”