Incoming NYPD Commissioner is Ready for the Challenge

Dermot Shea, the man who will soon be Police Commissioner, reflected on his modest upbringing Monday as he accepted a promotion to replace outgoing top cop James O'Neill. 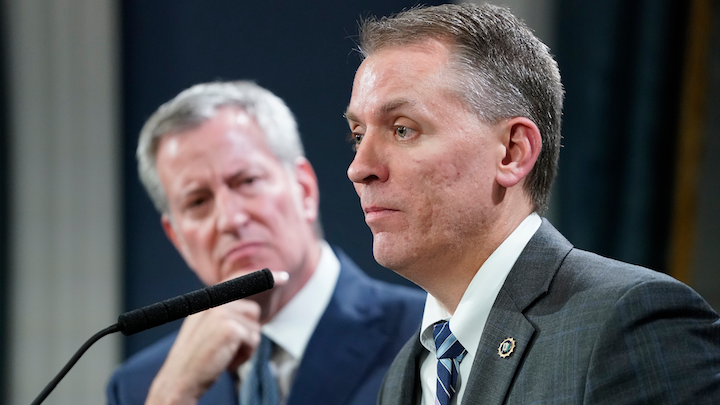 NEW YORK -- The city’s new top cop grew up with four siblings, a dog and his parents in a small Queens apartment.

Dermot Shea, the man who will soon be Police Commissioner, reflected on his modest upbringing Monday as he accepted a promotion to replace outgoing top cop James O’Neill.

The 50-year-old from Queens said he spent his childhood in a crowded one- and later two-bedroom apartment in Sunnyside. His parents were both Irish immigrants who met in the city and married. His father worked as a union handyman.

“We were rich in so many ways, but it had nothing to do with money,” Shea said.

He said his father, who is deceased, would have been thrilled by his promotion.

“Somewhere upstairs there is a hell of a celebration going on in heaven," Shea said. “There is probably some Irish whiskey being spilled.”

Shea joined the NYPD in 1991 with his brother Jim and his cousin Chris. He started out walking the tough streets of the South Bronx and later was assigned to narcotics and various plainclothes units.

“He started out as a beat cop in the South Bronx back when that community was going to hell,” Mayor de Blasio said. “His parents worked so hard to provide for their kids. Dermot was not born with a silver spoon in his mouth.”

He also served as commander of the 44th Precinct and the 50th Precinct in the Bronx. In all, he spent 20 years assigned to the Bronx in various roles.

“Sometimes I really miss those days. There was nothing better than talking to people,” Shea said at the press conference with the mayor and O’Neill to announce the leadership change at One Police Plaza.

Former Police Commissioner Bill Bratton was the first to notice Shea’s organizational talents and named him Head of Operations. Under O’Neill, he rose to Chief of Crime Control Strategies, a role perfect for Shea’s heavy attention to detail.

After Chief of Detectives Robert Boyce retired in April 2018, Shea replaced him and earned a reputation for being more reticent with information than his predecessor.