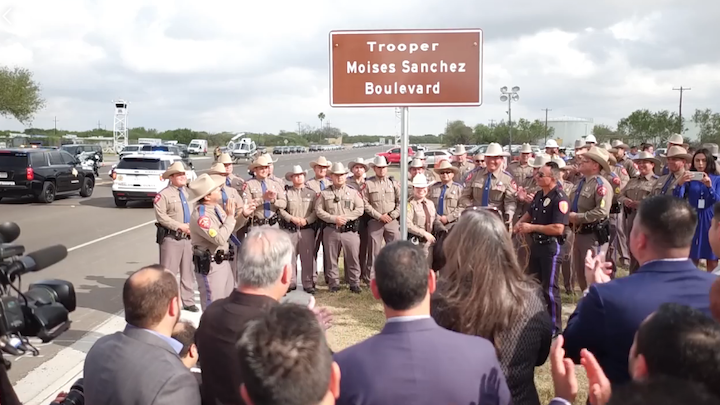 EDINBURG, Texas --It was an all too familiar scene Wednesday as local law enforcement from throughout the Rio Grande Valley gathered to pay tribute to Texas Department of Public Safety Trooper Moises Sanchez, whose death after sustaining gunshot wounds while in the line of duty earlier this year triggered a Valley-wide state of mourning.

At the corner of N. 10th Street and State Highway 107, Edinburg police joined state troopers, Border Patrol and other brothers in blue in unveiling a new street, Trooper Moises Sanchez Boulevard, which runs between Highway 107 and Monte Cristo Road. It was one of many ceremonies honoring Sanchez’s memory since his death in August.

But for Sanchez’s family, the numerous events held in the wake of the trooper’s death are now becoming a source of comfort that, according to his son, Zachary Sanchez, are a coping mechanism.

“How can you forget an entire city coming together to an entire county to an entire state?” Zachary asked during the unveiling ceremony. “While it doesn’t of course fix the ultimate hole that’s left in our hearts, it’s an amazing start to begin recovery and to begin this healing process we had already begun.”

Hundreds of cars filled the empty fields at the location of the new Trooper Moises Sanchez Boulevard on Wednesday, where members of law enforcement stood in uniform. The scene was moving for many, as a large American flag flowed in harmony with the wind.

Underneath a white tent, Sanchez’s family was accompanied by members of the community for the unveiling.

Sanchez was killed following a surgical procedure in August to address injuries sustained in an April 6 shooting, in which Sanchez responded to a motor vehicle accident in Edinburg. Victor Alejandro Godinez, the man involved in the incident, is accused to have opened fire on Sanchez.

“I generally prepare words, but there are no words today,” state Rep. Terry Canales said at the event. “There’s nothing to tell you how sorry we all are.”

Canales continued to speak about Sanchez’s history in the U.S. Marine Corps.

“Law enforcement and our first responders: You are our marines at home; you are in the frontlines here. Trooper Sanchez left one of the most dangerous positions and enlisted to do it again.”

In hopes to help ease Sanchez’s family’s pain, Canales presented them with an official resolution and the flag that was flown over the State Capital in Sanchez’s honor.

“We love you with all of our heart,” Canales directed to the family. “He will never be forgotten.”

Zachary thanked all those who came to the event, and shared his experiences with people asking him about his father.

“Many of you already know the story and how tragic it was,” but said that the consideration and support from the community has “ultimately become beautiful.”

He closed with a prayer, that “not only do we remember my father, but we remember all of our brothers and sisters in blue every single time we see this street — the time we banded together to show support for one of our fallen.”

Zachary’s speech was met with a standing ovation.

To conclude the event, the Sanchez family was the first to drive on the road now named in honor of their father.