Wounded Chicago Cop Mentioned in Trump’s Speech: ‘I Loved It’

President Donald Trump’s speech at McCormick Place on Monday morning grabbed the most attention for his full-on attack of police Superintendent Eddie Johnson, but he also took a moment to honor another Chicago cop who was wounded in a shootout last month. 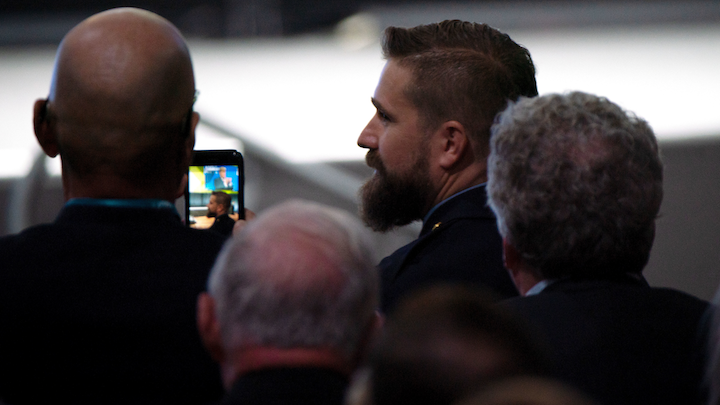 CHICAGO -- President Donald Trump’s speech at McCormick Place on Monday morning grabbed the most attention for his full-on attack of police Superintendent Eddie Johnson, but he also took a moment to honor another Chicago cop who was wounded in a shootout last month.

Adam Wazny was serving an arrest warrant with his partner at a home in West Englewood when the suspect, identified as Michael Blackman, allegedly fled the house before turning around and opening fire on the two officers, striking Wazny. The 41-year-old officer was hospitalized for nearly a month and was released last week to continue his recovery at home.

“As you know, in recent years our country has seen a dangerous trend of criminals assaulting police. We don’t like that. Last month, Chicago police Officer Adam Wazny was serving an arrest warrant for a man suspected of shooting a woman when the suspect opened fire and shot Adam multiple times,” Trump said during his speech. “He was very, very badly hurt. Adam’s fellow officers chased down the gunman while Adam stemmed the bleeding from his wound, almost died. After a month in the hospital and multiple surgeries after that, Adam recently came home to his wife, Annie, and to his two young children, so badly hurt.

“We’re profoundly grateful that Adam is with us today," Trump said over a loud round of applause. “Officer Wazny, we commend your tremendous bravery. Thank you.”

Afterward, Wazny made his first public comments about the shooting during a brief interview with the Chicago Tribune. A fellow officer pushed Wazny, who was dressed in his formal blue police uniform, out of the convention hall in a wheelchair.

“It was a very great honor. It was very surreal. I was very humbled and appreciative that the president even mentioned my name,” Wazny said. “That was huge. I never expected, and then when it happened, it was an honor.”

During the shootout, Wazny was wounded, with one bullet hitting an artery. He and his partner used tourniquets to stem his heavy bleeding and he quickly was driven to Advocate Christ Medical Center in Oak Lawn. Earlier this month, officers honored Wazny as he was released from the hospital and returned home.

“It’s just our job. We’re trying to protect the citizens of Chicago, and unfortunately, sometimes on the job, this happens," Wazny said of the shooting. “Sometimes, we have to face the worst evil that there is, and then still do your job.”

The shooting remains under investigation by the Independent Police Review Authority, which is standard protocol for all police-involved shootings in the city. As such, officers cannot publicly discuss details of the incident.

Blackman escaped after wounding Wazny, but officers located him six blocks away six hours later after reviewing surveillance video that showed him fleeing to the area. Blackman emerged from a vacant home and opened fire on another officer, who returned fire, according to prosecutors. Officers pursued him over a railroad embankment, into a fenced-in car lot, where Blackman allegedly exited an SUV, ignored orders to drop his weapon and fired in the direction of three officers, according to police.

Blackman continued to shoot after being wounded and later was hospitalized with up to eight gunshot wounds. Police recovered a 9 mm handgun and three cartridge casings. Officers described Blackman, 45, as an “engine of violence” for wreaking havoc over a four-day period, including shooting a woman in broad daylight in the upscale Fulton River District on the Near West Side while he rode a motorized bicycle. Police say the gun recovered linked him to that shooting, which also was caught on surveillance video.

“I became a victim from the outcome,” Wazny said. “I’m just glad eventually the offender was caught and then hopefully he’s going to be brought to justice.”

Trump mentioned Wazny’s story as part of his speech Monday to the International Association of Chiefs of Police convention at McCormick Place. Trump honored several officers and commended their work, ending his speech by declaring, “To all the terrific officers here today, thank you for your unwavering courage, your unbreakable devotion. Today and every day I vow to stand proudly, loyally and faithfully with the men and women in blue.”

Asked what he thought about Trump’s decidedly pro-police speech, Wazny replied, “I loved it.”

The president’s 66-minute speech, however, was far from all praise. Trump bashed cities like Chicago for their sanctuary city status that prevents police officers from inquiring about an individual’s immigration status or from referring individuals to Immigration and Customs Enforcement officers.

The president also sharply attacked Johnson, the city’s top cop who snubbed his address and said Trump’s appearance “doesn’t line up with our city’s core values, along with my personal values.” Trump called that rationale, “a very insulting statement after all I’ve done for the police.”

“There is one person who is not here today. We’re in Chicago. I said, ‘Where is he? I want to talk to him.’ In fact, more than anyone else, he should be here, because maybe he could learn something,” Trump said of Johnson before several hundred convention attendees. “Here’s a man who could not bother to show up for a meeting of police chiefs, the most respected people in the country, in his hometown and with the president of the United States. And you know why? It’s because he’s not doing his job.”

Asked for his reaction to Trump’s comments about his boss and the city’s top police officer, Wazny offered brief pause.