President Donald Trump signed an executive order creating a commission to study causes behind crime activity including any role mental health issues, drug abuse and homelessness may impact violence during his speech at IACP 2019 on Monday. 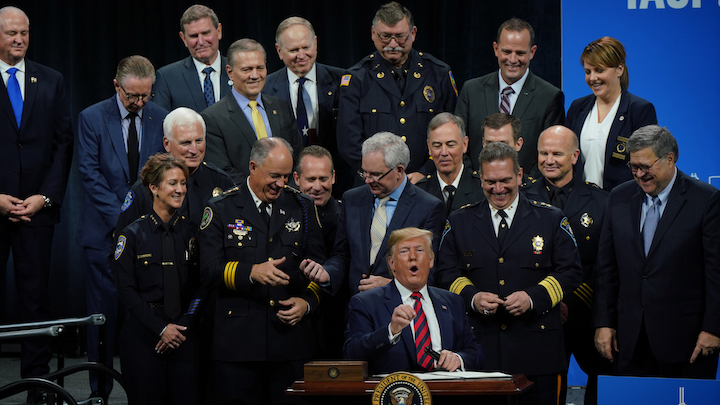 President Donald Trump signs an executive order establishing a new executive \"Commission on Law Enforcement\" and the \"Administration of Justice\" at the International Association of Chiefs of Police Annual Conference at McCormick Place on Oct. 28, 2019.
E. Jason Wambsgans/Chicago Tribune/TNS

CHICAGO -- President Donald Trump launched an extended blistering attack on police Superintendent Eddie Johnson and the city’s gun violence in Chicago on Monday, accusing him of protecting “criminals and illegal aliens” ahead of city residents and promoting values that are a “disgrace.”

Speaking at the International Association of Chiefs of Police convention at McCormick Place, Trump noted Johnson snubbed his address because he said it didn’t align with his and the city’s values.

“There is one person who is not here today. We’re in Chicago. I said, ‘Where is he? I want to talk to him.’ In fact, more than anyone else, he should be here, because maybe he could learn something,” Trump said of Johnson before several hundred convention attendees.

“Here’s a man who could not bother to show up for a meeting of police chiefs, the most respected people in the country, in his hometown and with the president of the United States. And you know why? It’s because he’s not doing his job.”

Trump called Chicago “the worst sanctuary city in America” and cited the refusal of the city’s Police Department under Johnson to detain people in the country illegally for immigration enforcement.

“Chicago protects criminals at a level few could even imagine,” Trump said, contending 1,162 requests to detain people from Immigration and Customs Enforcement were denied last year in Cook County.

“In each case, the detainer was denied and Eddie Johnson wants to talk about values? No. People like Johnson put criminals and illegal aliens before the citizens of Chicago and those are his values and frankly those values to me are a disgrace,” Trump said.

“I want Eddie Johnson to change his values and change them fast,” he said.

Trump once again wrongly said the city had the nation’s toughest gun laws. “That doesn’t seem to be working too well, does it?” he said. “They certainly don’t protect people.”

The president also likened the case of actor Jussie Smollett — who Chicago police allege falsely claimed to be a victim of a hate crime perpetrated by Trump supporters — to efforts by House Democrats in Washington who have launched an impeachment inquiry against him.

Smollett’s action was “a scam, a real big scam, just like the impeachment of your president is a scam,” Trump said.

Trump also turned to a three-year-old story of visiting Chicago and being accompanied by a motorcycle brigade of hundreds of riders. He said the leader of the brigade told him the city had struggled with violence because of failed leadership from then-Mayor Rahm Emanuel and the Police Department’s top brass.

“How long do you think it would take to fix this killing problem in Chicago?” Trump said he asked the man. “One day, sir,” the man responded, implying that the cops knew what to do, but the political leaders were getting in the way.

Trump has told the story several times, before but never identified the man other than to say he’s a cop. The president mused that the man now probably has a “very good job” outside of a police department to laughs.

In Chicago, through mid-October, both homicides and shooting incidents have fallen by 11% this year, according to official Police Department statistics. Those numbers continue double-digit declines seen in both 2018 and 2017 after the tumultuous 2016 results when more than 760 people were killed and in excess of 4,300 were shot in Chicago.

While Trump heavily criticized Johnson, he did not mention an investigation that the city’s police inspector general is handling after the police superintendent was found asleep in his parked car near his home earlier this month. Johnson has blamed his failure to take medication for the incident, though Mayor Lori Lightfoot has said the top cop also told her he had a few alcoholic beverages that evening.

Trump was joined in his visit by Attorney General William Barr. Also attending the chiefs of police event were three of Illinois’ five Republican congressmen: U.S. Reps. Darin LaHood of Peoria, Rodney Davis of Taylorville and Mike Bost of Murphysboro.

The commission established by the executive order also will be charged with finding ways to better recruit, train and retrain law enforcement officials across the country.

Trump’s visit, his first to Chicago as president, was aimed at making a personal statement to a city after years of attacks from afar over its gun violence and Democratic leadership.

Setting the tenor for the event, with Mayor Lori Lightfoot joining Johnson in snubbing the presidential visit, Trump was met at O’Hare International Airport by Kevin Graham, the president of the city’s Fraternal Order of Police.

On Twitter, Lightfoot responded: “It's no surprise that (Trump) brought his insulting, ignorant buffoonery to Chicago. Luckily, in this city, we know the truth and we will not let anyone — no matter how high the office — denigrate who we are as a people or our status as a welcoming city.”

She added her support for Johnson in a follow-up tweet: “President Trump knows as much about policing as he does running a fair and transparent government. I stand by the Superintendent for living up to the values of this great city and its residents.”

The event also gave the president a renewed opportunity to tout the death of the leader of the Islamic State, Abu Bakr al-Baghdadi during a U.S. military raid in Syria, which he announced to the nation a day earlier.

Al-Baghdadi’s death was considered a significant foreign policy victory for Trump, who had found his decision to allow Turkey and Russia to control northern Syria, leaving behind U.S.-allied Kurds, subject to criticism from Democrats and Republicans alike.

“It was a tremendous weekend for our country. We killed ISIS leader al-Baghdadi. He was a sick and depraved man, and now he’s dead,” Trump said as the police leaders laughed. “He’s dead. He’s dead as a doornail. And he didn’t die bravely either. He should have been killed years ago. Another president should have gotten him.”

After his address to the chiefs, he was headed to his downtown Trump Tower for a reelection fundraiser.

Trump’s visit came amid heightened security. The Chicago Police Department canceled scheduled days off for 1,800 officers to add extra personnel around McCormick Place and Trump Tower. Police were bracing for upward of 20,000 protesters.

The state Democratic Party called for a “day of action” to coincide with Trump’s visit and take “actions to find a positive way to counter his negativity, including urging supporters to join demonstrations near Trump Tower or even to “do a random act of kindness for a stranger.”

The fundraising luncheon had three levels of admission ranging from $2,800 for a lunch ticket, $35,000 per couple donated or raised to earn a photo with the president and $100,000 raised for an exclusive roundtable sit-down with Trump.

Donations from the event will go to Trump Victory, a joint fundraising of Trump’s reelection fund and the Republican National Committee. Organizers said they estimated the event would raise $4 million for Trump’s already ample campaign fund with about 250 people expected.