Describing it as a “personal” choice, Chicago police Superintendent Eddie Johnson stood firm on his decision to opt out of a speech President Donald Trump will be delivering in Chicago at the International Association of Chiefs of Police. 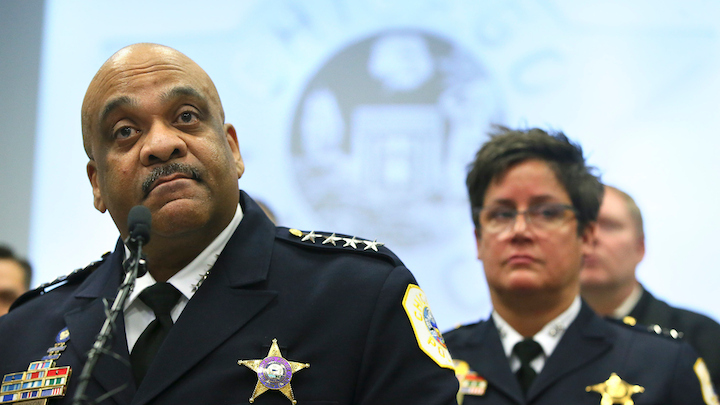 Chicago police Superintendent Eddie Johnson speaks about the details of the arrest and charges of Jussie Smollett at Chicago police headquarters on Thursday, Feb. 21, 2019 in Chicago.
Stacey Wescott/Chicago Tribune/TNS

CHICAGO — Describing it as a “personal” choice, Chicago police Superintendent Eddie Johnson stood firm on his decision to opt out of a speech President Donald Trump will be delivering in Chicago at the International Association of Chiefs of Police.

“It just doesn’t line up with our city’s core values, along with my personal values,” Johnson told reporters as he stood at a podium next to two other police officials following the Major Cities Chiefs Association conference at McCormick Place on Saturday afternoon.

Johnson clarified that other police officers were given the green light to attend the speech, also held at McCormick Place, if they want.

“It’s not about the department,” Johnson said. “It’s really about me and the way I feel about the core values of this city.”

While he would not elaborate on what he and Mayor Lori Lightfoot discussed about skipping the event, he said the decision also involved trust, which he said the Police Department needs, especially in the city’s immigrant communities, some of which are “under siege” by policies of the Trump administration.

“We are nothing without the trust” of the people of the city, Johnson said. “We want the immigrant communities to trust the Police Department. We don’t need them to fear us and to flee us.”

Of Saturday’s meeting, which he called “truly invigorating,” Johnson said it was important to share ideas with other chiefs who are just as passionate about the job as he is.

“This job can sometimes feel like you’re alone, but this meeting is the opposite.”

Johnson briefly touched on his tenure as superintendent and the improvements he said he has made.

“Violent crime is down 10% year to date,” Johnson said. “I know my hometown will continue to shine. “

“I’ve got everything kind of straightened out,” Johnson said, before visiting large tables nearby stacked with charity items that will be donated to women, children and adolescents at domestic violence shelters.

Johnson called for internal investigation on himself after officers responding to a recent 911 call found him asleep in his parked car near his home in the Bridgeport neighborhood.

While loading a backpack full of books, toys, toiletries and games, he wrote a personal note on a white bookmark with a white tassel before tucking it away.

“Remember that the only thing that can stop you is you,” Johnson said he wrote.